Contrada della Chiocciola: everything you should know about it

Scrollen
Home > News > Contrada della Chiocciola: everything you should know about it
Postata il: 30 September 2018

There is a lot to tell about each of the 17 Contrade of Siena, because each one describes a fragment of Sienese history and, in some way, tells something about the personality of the inhabitants.

The Snail (Chiocciola) is one of the 10 Contrada participating in the extraordinary Palio of Siena at October 20th 2018, the 49th extraordinary Palio, an event that was decided to celebrate the centennial of the end of the First World War, which took place in 1918. About the next Palio, there are several oddities to highlight: this is the first time that the following ten Contrada join the Palio together (Torre, Lupa, Chiocciola, Oca, Drago, Tartuca, Selva, Civetta, Nicchio and Giraffa); the Chiocciola had voted against the possibility of disputing this Palio (but 10 Contrada voted in favor, thus decreeing the decision to organize it); moreover, the Chiocciola was the first to win an extraordinary Palio, the one held on 3rd July 1712.To learn more about the last Palio of August 16th, read the article How to get ready for the Palio.

The origins of the Contrada della Chiocciola 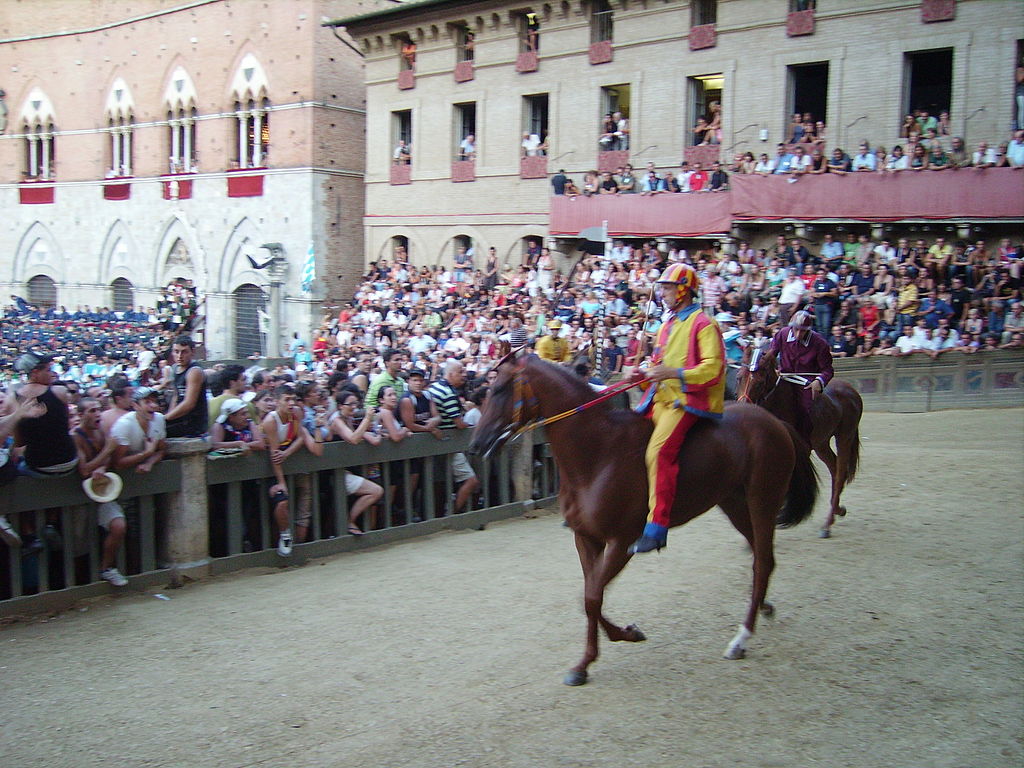 Chiocciola is the first Contrada to be mentioned with its own name, referring to the Gioco della Pugna, in the XV century, more precisely in 1482, when it faced the Giraffa; that was the first occasion in which the name of an animal was associated with a Contrada.
Its territory extends from Porta S. Marco, continues towards the Arch of the Via dei Maestri (current Arco di S. Lucia) up to the stretch of Via S. Quirico that leads from the namesake square to Via Stalloreggi. This is the south-western corner of the town. In this area there is even Via della Diana, named after a river that, according to legend, flowed underground and allowed the great plenty of water in Siena in the Middle Age. For this reason, even today, the undergrounds of Siena are characterized by a dense network of tunnels, dug to find water.

The peculiarity of the Chiocciola coat of arms is that, until the Fifties, there wasn’t an official symbol and anyone could propose new models of flags. In 1957 a design by Dino Rolfi was chosen, which became the official flag.

The official colors are yellow and red with scales with a blue border; in the emblem there is a creeping snail on a white field, sown with Cyprus roses, white and red, ernating with the letters „U“ (Umberto I) and „M“ (Margherita di Savoia).

The motto is „Con lento passo e grave, nel Campo a trionfar Chiocciola scende“, while the nickname of these Contradaioli is “affogasanti”: this nickname is related to an event occurred in 1888, when a contradaiolo threw an icon of Sant’Antonio abate in the well and since then, began a long series of defeats in the subsequent Palios.

The Chiocciola came second on many occasions and returned to winning only after recovering the image of the Saint, having restored it and exhibited it in the church of the Contrada. About patron saints, those of the Chiocciola are St. Peter and Paul, which are celebrated on June 29th.

Regarding the rivalries, the most famous is with the Tartuca, while the allies are Istrice, Pantera and Selva. The Palios won today are 51, the last one dates back to 1999.

For further information check to the official website: www.contradadellachiocciola.it.